Of people's dead and split families whilst the political class parties

This essentially follows on from reader Woodsy's comment which mentions Boris ... and I add that it only takes one person to make someone else's experience, most times fairly innocuous, either a pleasure or misery.

I do have an obnoxious neighbour just now who last evening was ranted at by another resident, he's quite oblivious that he could possibly be the cause of stress to others - this is the downside of libertarianism. To him, 'others' just get in the way of his 'progress', like carpentry in his flat at 9 p.m., then living it up through the night.

There are degrees of pathology and shifting the focus to those watching this blog for any signs of dissent from authoritarian decree, from an adopted and now exploded position which results in blanket application of a handed-down and increasingly wrong stance by those above us ... this has its parallel in the whole despotic behaviour by what we call 'karens', male and female.

By the way, that's a lower case first letter, not capitalised, it's a general term, like peeping tom ... it does not mean every Tom, Dick or Harry are involved.

What is dismaying and dispiriting about this, a phenomenon well known by the cabal above, the hidden rulers of the darkness of the world, is that the common joe or jo so readily reacts to her/his newfound power to 'turn someone in' for not adhering to the exploded narrative in a jawohl mein fuhrer way, that this person almost 'gets off on' this newfound power, without any legal or constitutional authority to do so.

I've constantly maintained since the Brexit war hotted up in 2010, that it was not the legalities in the least, which are fragmented and opposed, same with 'precedent' ... but it was political will which reigned over a long enough period to make people's lives a misery.

A good example from US history was Pres Andrew Johnson, post-Lincoln, who was impeached or close to it, yet fifty years later was exonerated by SCOTUS.

This is why core principles such as those written into the amendments, though obviously couched in the terminology of the day, are still eternally applicable, despite the malicious attempts by despots' myrmidons and lackeys to argue 'no future applicability' because of the seemingly anachronistic use of words such as 'militias'.  Or the key ideas in the gospels and in other passages which set the tone for our society, e.g. The Ten Commandments.

Does it not come down, yet again, to political will on behalf of the 'leaders', a willingness to embrace, not just the letter of the oft-affirmed basic laws but also their spirit?

It is mendacity writ large for such 'leaders' to preach, ahead of election, adherence to these eternal ideas then, post-landslide, to utterly abandon them in favour of contrived interpretations.

Or to sneak through legislation in the dead of night.

Or to suddenly force splitting-wedges on people such as making lepers of the unvaxxed and creating a class of karens of limited brain at ground level to patrol parks and supermarkets to sniff out the least challenge to 'authority'.

Or to ignore the emerging literature in favour of increasingly illogical positions, when the stats say quite the opposite.  Yea, even to the extent of blindly applying strictures on the strength of really quite illegitimate work practices.

This is why two recent clips we saw are so vital - one in which five nurses were overly dominated by the male host doing a Bannon or Alex Jones and yet still those nurses got the idea out that there's an enormous lie going on.  That's the latest.

An earlier one was the conversation between the armed and armour-plated plod and a protester.  The plod member said it was his job on the line, bread on the table for his family, that he had no choice but to 'obey' the cabal and kick the stuffing out of the protester.

That, ladies and gentlemen, was chilling - the removal of responsibility and common humanity in these myrmidons' minds and adopting the 'I was only following orders' defence in order to absolve themselves, a la Pontius Pilate.  Chilling in the light of prior world history, not all that long ago.

But the preceding is still too abstract, still too removed to hit home.  We have, at OoL, a living example in Grandpa, our fellow blogger, who lost his beloved wife recently due to the inhuman behaviour of the medicos and now established wrong treatment, which saw him lose her.  How could that narrative-driven med-bureaucrat who ordered that, on pain of dismissal of staff livelihoods, possibly care about Grandpa's murdered wife?  Because that's what happened.

We were in touch yesterday, GP and I, he still totally devastated ... does Boris care?  Pelosi?

And this is why the partying issue is so, so sensitive across Britain and the world today ... more so than any of the actual med issues or vaxx passports or enforced jabs.  It's that partying which has disgusted people across the political spectrum.

It is very, very close to the end for them. 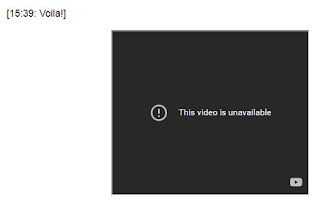 This is one reason I'm leaving up the censored youtube blank, just as a reminder.