Another deep sleep in, sorry, back on the job. Immediately certain things present themselves:

I really want to know who orchestrated these dances and why. High production values..choreography...drone shots...this is financed and took rehearsal time. It’s not just spontaneous fun. https://t.co/EARKe29k7Y

The first  dilemma is that this is on Twitter.  Naomi Wolf, the dissident doctor, had to get this word out somehow. She could go Gab, Parler while it was up, the new Frankspeak, by blog ... but the only way she could be assured of at least a sneak look by most people worldwide is to show that dancing taking place.

So that you could see the scale of this thing.  Yes, she could go youtube but the same number are not looking for this on youtube.  Those dances are instantly available right here - Twitter make it that way, whilst doing as they do, kicking off James O'Keefe.

So I, in fact, am putting temptation your way, just as Naomi Wolf has.

And they know it.  And laugh.

The description above does cover it - it asks who is paying for these slickly choreographed dances when they should be doing their doctoring and nursing?  Why on earth are doctors and nurses going along with the outrage?

Ordered to?  Loss of job?  Is it presented to them that they are downtrodden medical staff and this is just to keep morale up?

The second dilemma ties in with Steve's comment last evening:

He's done with it: Seranza Resigns in Italy Admitting This is a Marxist Revolution Using Covid

Even Blind Freddy [sorry to be sightist] can string these thoughts together and see that someone is pumping in money.  China?  Soros?  The cabal as a whole?  The UN?  The crony capitalist corporations?  Crowdfunding by DemRats?  Who's pumping this cash in to even get those choreographers into hospitals to do this?

And the next part of it - every one of the people in your particular land must face up to these doctors and nurses sooner or later, for some condition or other.  What are you going to say to these people - people in charge of making you better?  How is your confidence in them?

If you do have the temerity to take them to task for the dancing - provided you can even get an appointment without the vaxx hardsell, the vaxx passport - are you going to ask them why they dance while people are suffering?

They'll deny anyone is suffering on account of them - they'll quote some bullsh survey saying 80% support them in their endeavours.  Because if they don't say that, once you've gone, they are in deep do-dos.

And you're worried that if there's a jab or exploratory involved in your condition - they have the power over you for that time.  They can do anything to you.  How would you get redress?

That is the banality of evil.  And coming back to it, not as deep as calling it evil but just a bog standard Marxist takeover of each country, starting with the UK and US ... the final insult, so to speak, is that despite all the trauma and suffering of people with their loved ones for over a year now - one still gets this:

Which undercuts the point of this post so far.

There was footage of that Canadian protest.

You see my dilemma and that of all pundits.  How else would you know?  I am not championing Twitter, I'm asking how else I, for one, can get quite the news coverage elsewhere?  The boys and gal at N.O. bring a fair bit to readers but it's still a drop in the ocean.

Yes we'll go the Frankspeech route unless it is Kushner connected and wants our phone numbers.  And even then it's US-centric, like Gab and Parler.  Where's the UK version?

But it's still not over - there's a third dilemma:

A tweet recounted this man's visit to a shop and some zealot in mask screamed at him to get back.  He was already somewhere around six feet away but closing fast.  How could he explain that the masks do nothing, that it matters not if he's 5'8" away or 6'4" away?  That lockdowns have not killed this thing off, whatever it is?  That there's a strong case that it does not even exist as a separate virus - it's not been isolated.  So far.

Yet all this in order for one man to scream at another while walking about like a zombie. 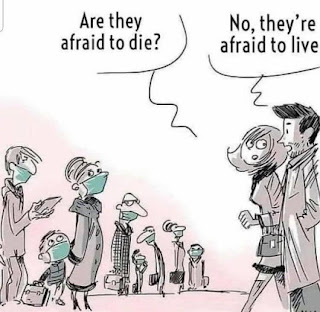 One last dilemma for now, specific to OoL.  Why repeat this post, why run it in two places?
Answer includes that there's an overlap in readership.  There are those reading both OoL and the authors' sites [inc. Julia, Grandpa and Churchmouse here], there are those on Twitter from non-UK lands who receive the OoL feed but not the personal site specific feeds.
We need to cater for both categories of readers - we have no way of knowing who has access to what.  let alone what the loss of the old OoL did to traffic.
Should we run only OoL specific posts here and not refer to links and stories from other blogs?