Why we will ALWAYS lose.

Need to say that both these ladies below are in the family way - Rebecca [and the other one not here, sometimes vlogging, Robyn the Canadian] have had progeny recently, Brittany has a bun in the oven now.

Their perspective in producing and raising children in these latter, dystopian days - well if anyone's qualified to speak on that, they are.  That's the first part of this post:

Some key points in the discursive nattering of the gals include:

#  Blonde Rebecca is not sure she's 'patriotic' to America now in the sense that if the left can so easily ride roughshod over the Constitution, then maybe the Constitution was not all that strong in the first place in protecting America.

Any evangelical could tell her that of course the Constitution itself can't do that - the language of the Constitution was quite Christian and required the protection of that oft-mentioned Maker. You might not like that, students of US history, but there it is.  And Rebecca is not as close to that realisation as Brittany is, and therefore does it tougher, is more prone to personal despair.

#  Brittany's tale is that since she, an American with German, Scandinavian and eastern European roots, moved to Austria with her public enemy number one hubby Martin Selner, she has seen things from a far more-pan-western perspective [actually first mentioned by Rebecca and that's what she means by less patriotic to America but more patriotic to western ideals, i.e. anti-Wokery, anti-communism].

Blonde now sees the roots of the whole western thang [sic] and I'd add - which is essentially this blend of Christianity and classical liberalism, post-1770s, which in turn means the Kaiser and Hitler were aberrations by the other side, the cabal still firmly ensconced and running things.

#  Brittany mentions that in Austria, police don't even need warrants, they can just break down the door, even if the family is there, babies on the rug, family eating lunch - they come in, take computers, search through the home and take away anyone and anything they wish to.

Where have we seen this before?  In Terry Gilliam's Brazil - the Buttles and Tuttles bureaucratic blunder. That is worrying - it could happen to me at any moment, also to you for viewing this blog.

#  Rebecca brought up Laura Towler whose bank account was frozen in the UK, no questions asked, no warnings.  Think about that - the money you have in electronic form suddenly taken.  They call it 'frozen' - what they mean is you then go through a process of drawn out appeal, costing you all the while, having to get the poisoned jab etc. etc.  That is specifically in the UK.  In short, it is Nazi Germany and the Soviet Union, also the CCP.  That's the reality.

To illustrate this further, I myself have had my Twitter account suspended but they say no, no no, he's not suspended after the twelve hours, all he need do is give us his phone number and all is well.  In fact, Twitter have started emailing me now to please come back.  Yep.  But when I try it for the exercise - yup, up comes the blank page with the demand for my phone number.

#  Rebecca mentioned that in the US [she's in Idaho], everywhere she goes, anywhere she needs something - there are SDLP activist controlled 'helpers', you need to hear how she put it.

In summary, the left are legion, they're everywhere at local level.  Every which way you turn - there's a leftist running it. Brittany responded that that's the difference between right and left - the right are more concerned with the 'big solution' e.g. put someone in at the head such as DJT, lots of razzmatazz, he signs EOs to alter things, the recovery miraculously happens.

But it never happens because he does not own and/or control the mechanisms, e.g. voting machines, lower courts, higher courts, media, medicine, social security, education, entertainment - all of it.

He occupied a near meaningless Oval Office.

At local level, the left run everything.

Why?  Because they are far more ideologically fanatical and less lazy [the devil is a very hard worker] than we are.  They worm their way through every fissure [Senator Jenner, 1954] and are happy to do all this intensely boring, local level infighting. We are not.  I did not even go to vote, I stayed here and wrote posts about what the left were doing.  I think you see where this is going.

And though it is useful to think through this question in the heading, it still does not 'control' any aspect of life, it just comments on it from a distance.  Ergo, any who are like me are going to lose, every single time.

And how does the left handle splintering, fragmentation?  It decrees from above.  It is a top down organisation, the Narrative is handed down for underlings to comply with - we see it with Covid masks, lockdowns and poisoned jabs.  Whereas we ourselves are unherdable cats =>  therefore we always lose.

Consider this - Tucker was addressing the issue of the black mayor [on our left in the picture] who attacked dancing at a wedding.  Yep, you heard that right: 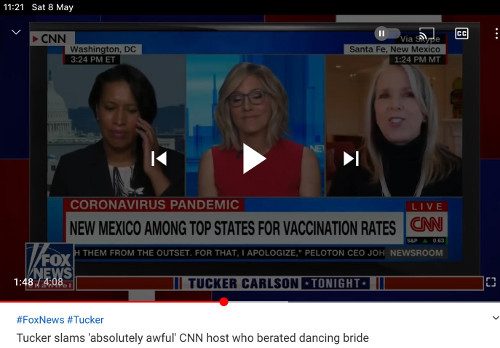 That's CNN, not Tucker in that screenshot - the host is Woke Plus, the black mayor is a nutter, which leaves the third.

Now, were it Tucker himself, he'd have a guest on our right and himself there.  Some hosts have the 'moderator' in the middle, one either side and generally, it will be two opposed people one either side.

So in that mode, I waited for blondie on our right in the screenshot to speak.  She's governor of some state in the US.  Well, she was identical to the other two.  Common front, common purpose, common core.

You do understand, dear reader, the implications.  Not remotely concerned with ratings, just as with the non-President, ONLY concerned with power and a unified message, which they label 'love and unity'.

Just like The English Beat, whose music I've oft played.  Not realising the full horror of what he was singing.

Why are we not even in the ballgame?  Because we're not fanatics who are happy to take on menial little bureaucratic jobs, simply to hold that role for the Great Reset.

But not only that.  During working age, we were out working, bringing home the bacon, then we retired and had our pension, such as it was.  We simply were not out occupying all the little positions, putting the little spanners into works, womanning the barricades or smashing shop windows like BLM/Antifa.

DJT makes a big statement and our right-media says ra ra ra, MAGA, but when push comes to shove, all these little Woke creeps are quietly saying 'over my dead body'.  Remember it starting with the Ninth Circuit?

So our media [the dissident right] make big statements about taking America back, taking Britain back, not understanding we control almost none of the minor roles - the little fanatics control those, happily doing their boring little bit which we refuse to bother with, they put their spanner in and that's that.

In short, this thing is a ratchet, like an EU power grab - incremental, always only the one way.  Never backwards.

Any loss reversed immediately, e.g. on January 6th, e.g. here on May 6th.

They're about to crash the economy - no more runs on the banks because it's all electronic now, innit?

It's a ratchet, folks.