Some Are, Undoubtedly, But Not The Ones That Are Always In The Papers, Colin...

Colin Macfarlane, the director of Stonewall Scotland, told members of the Scottish parliament’s equalities, human rights and civil justice committee: “There has been a whipping up of a moral panic and an othering of trans people in the public discourse. Trans people are not an ideology – trans people are our friends, our family and our colleagues.”

My friends, family and colleagues don't do this sort of thing: 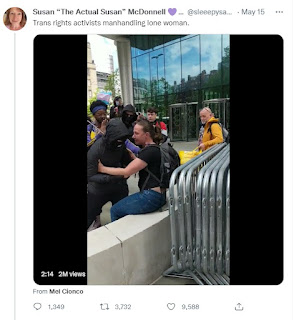 Of course, the police did nothing...well, no, not quite, they did threaten the victim that she could be arrested for breach of the peace for being attacked. Which is par for the course these days, isn't it?

Macfarlane told the committee the reforms would have no impact on the Equality Act – which affords protection from discrimination on the basis of sex, race, religion, gender reassignment and other characteristics. However, later in the session EHRC representatives said further examination was required of the implications of recent court cases on evolving legal concepts of sex, for example.

"Not so fast!" says the EHRC at last. "Your side keeps losing, so maybe we need to look at why..."

But Macfarlane said he wanted to highlight “this presentation of trans people and trans women in particular as a threat”, stating it was “deeply unfortunate … that there has been misinformation, some of it deliberate, around what the provisions of this bill will mean for the impact of women and girls”.

We know what it means. That's the problem.