The cost of living crisis will trigger an increase in crime and officers should use their “discretion” when deciding whether to prosecute people who steal in order to eat, the new chief inspector of constabulary has said.

Well, great! We haven't got the climate of California, but we'll soon have their rather 'interesting' approach to retail: 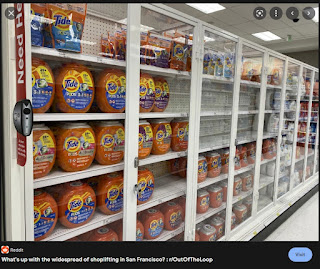 When asked how policing could avoid being seen as the arm of an uncaring state, he said forces across England and Wales were skilled in dealing with the tensions and dynamics of their communities.

Mainly by giving up, turning a blind eye and running away, or in extreme cases, surrendering.

Cooke said he was not advocating an amnesty for people who commit crimes of poverty, nor “giving a carte blanche for people to go out shoplifting”.

Yes, you absolutely are.

Email ThisBlogThis!Share to TwitterShare to FacebookShare to Pinterest
Labels: beyond belief, policing in the modern era, pull the other one