Think we need to face some realities about what we can face up to and how we prefer to have things.  You see, sooner or later, you are going to have to face them, as they're going to come to you, overtake you, swamp you.

For example, John Ward opens today with a question with a trigger word in there: 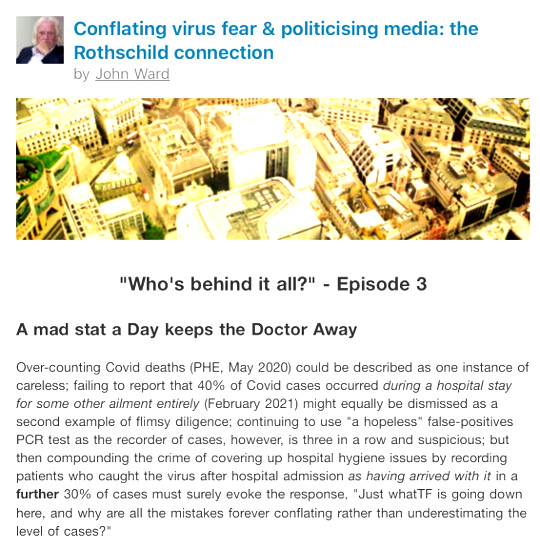 This post you're reading now is not about that Cv topic, nor the Rothschilds, it's about facing up to things in general.  As John Ward points out - someone's behind it.  The words Great Reset did not come from nowhere out of the blue - they were planned.  Where?  The UN?  Those behind the UN?  The banksters?  Who?  And when we cover one eye, look away then cry out, 'I can't see, I can't see,' it hardly helps resolve it, does it?
At N.O., we've been going to those Outer Limits and exploring for a decade and a half and it does have an effect on an ethernaut after a while.  Not everyone likes that, it's not quite respectable for a genteel libertarian, some wish to boldly and fearlessly venture within safer limits, for example, the State versus the individual and that's the brief at OoL, with a Brit-slant to it.
I'm myself guilty of coming over to OoL and going where no one really wanted to be. A post I did years ago at OoL on The Missing Children went down like a lead balloon for various reasons - it was a tacky topic people don't wish to look at.
We have more on that with Sargon and others here - they are prepared to look at the seamy side of Britain:
That's a particularly good episode from them.  One lady very much on the cusp of the issue was Sarah Champion, formerly MP for Rotherham and we all know what Rotherham was about.  She had a career, she was a rising star, she spoke out and now she's gone the way of Kate Hoey.  One pays a high price in reputation, I should know.
Another becoming marginalised is Richard Wellings: 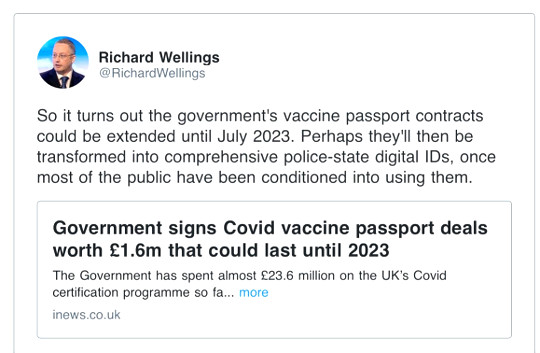 He's getting too close to the constant question of who is behind all this?  Where is that sort of money coming from?  And for what purpose?  And just look at the insults belched out by supposedly libertarian bloggers - have a look at this post:
https://dailysceptic.org/2021/07/30/is-christopher-snowdon-an-anti-vaxxer/
Why are the fearless caving in the face of what is a quite libertarian issue?  Why is the GOP caving in in the US?  Answer suggests itself, no - in thrall perhaps?  To whom?

But if we look back at Richard Wellings's tweet above, this is coming to you, personally, very soon.  So don't you think we really need to nail, not the faces of the cabal, the Macaroons, Johnsons and Sleazy Joes but the main drivers behind it?  Because Johnson is clearly not the one driving this over here: 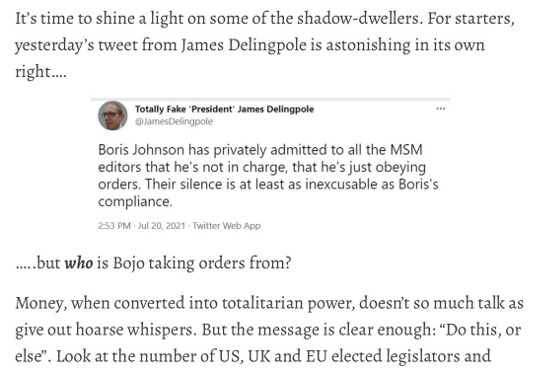 It hardly helps to generalise it, saying oh it's the commies, the Templars, the Masons - which ones?

Check out the first two minutes of this, you'll get the idea.  Be warned, this is Outer Limit stuff, N.O. stuff, not really OoL material, but two minutes should give you the idea:

Quick question - who appointed Cressida Dick after she'd washed the Brazilian blood from her hands?  I don't mean who signed off on it, I mean who pushed for her to be appointed?  Doesn't ring a bell?  And how many others have got clean away with things?

All right, I'll get off this topic now, sorry to have been a pain, have a lovely summer holiday.  If you go to the beach, hope you see some lovely dolphins too.

Update - one small addition which will help clear up the confusion and target who these lowlifes are:

The CDC isn't merely evil, it's cruel. Now they're openly mocking their own victims in their propaganda. Even more than lying, the wicked love to deceive by telling people exactly what they're doing in a manner that somehow prevents the average person from believing them. It's clear that those who are pushing the vaccine on everyone have an even lower opinion of the NPCs who are dumb enough to believe them than those who see through them do.